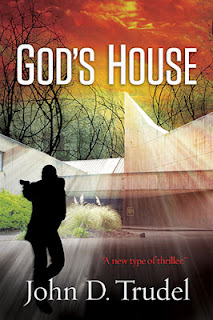 The Writer’s Blog welcomes John D. Trudel, who enjoyed a long career in High Technology. He worked with leading companies all over the world, and wrote non-fiction books and columns for National Magazines before turning his attention to Thriller novels. His last “real-job” was as the Business Development Manager of the research lab for a Fortune 500 company. After that, he ran his own consulting business, The Trudel Group, for more years than he cares to admit.

Trudel’s first novel was published in 2011. It’s gotten good critical reviews and enjoys 5-stars on Amazon.com. God’s House (ISBN 0983588600) is a science-based suspense novel that tells the story of CIA agent Jack Donner’s struggle to find honor and solve the murder of his friend.

Donner’s hopeless mission to Nigeria was a disaster. Desperate and out in the cold, Jack bent the rules to protect an American businessman. After his charge is killed, Jack brings his body home as he promised. When he meets the widow, Anne Davis, at the funeral, she demands to know the circumstances of her husband’s death and who killed him.

Leaving Anne to grieve, Jack goes to Langley to face charges. Worlds apart, they try to move on, but can’t. To survive, they must work together to uncover secrets that powerful people want to keep buried.

Written to engage and entertain, the novel mixes cutting-edge technological and political insight, espionage, adventure and romance. It is intended to appeal to lovers of thrillers and high-concept suspense. Though not a romance novel, it placed in the middle of the (formidable) pack for the 2012 Romance Writers of America (RWA) “Golden Heart” competition in the category of romantic suspense, and was a finalist for the 2012 Eric Hoffer “da Vinci Eye” Award.

God’s House is available for sale at Amazon.com, B&N, and other channels, and for most E-book readers. Foreign language publications are being licensed, and John’s second novel, Privacy Wars, will be out by the Fall.

John hangs his hat in Oregon, Arizona, and Cyberspace. He favors exotic locations and small airports when he’s not in his room talking to imaginary friends. He is a member of PNWA, ITW, RWA, Willamette Writers, AOPA, NRA, Facebook, and his mother was a proud DAR member. Check his website, www.johntrudel.com, for a bio, interviews, and information on his books. Signed copies can be ordered there. John promises to respond to all reader comments that come in through Facebook or his website.

Posted by bloodwebauthor at 1:47 PM