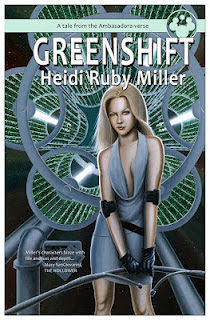 I am proud to host Heidi Ruby Miller who writes her own brand of sci fi, mixing it with healthy doses of romance and suspense. She has a brand new release and you can win it - please keep reading - simply by leaving a comment below. Heidi also hosts her own blog with the really cool title: "Just a Girl."
But read on and you'll see she is anything but.

I started out writing Science Fiction—that was my intent at least when I entered Seton Hill University's Writing Popular Fiction graduate program. So imagine my surprise when, during my first residency, I'm sitting anxiously waiting for the critique group to tell me what they thought of the first chapter of Ambasadora and several people ask if this was meant to be a futuristic romance.

I thought they were joking.

As I listened to suggestions from the SF crowd to make it more SF and suggestions from the Romance contingency to make it more Romance, I was left wondering what in the hell did I write? Okay, so maybe some of my characters, or - all - of my characters thought about their attraction to other characters much more than in a typical SF novel. And maybe the multiple POVs and interweaving plotlines were more reminiscent of a thriller than a typical Romance novel, but this was exactly the kind of book I wanted to read.

In fact, my reading influences were all over. I'm a diverse reader, therefore it would stand to reason that I'm also a diverse storyteller. A list of my favorite books says it all: Madeleine L'Engle's A Wrinkle in Time, Preston and Child's Relic, Sara Creasy's Children of Scarabaeus, Wouk's Don’t Stop the Carnival, Max Brooks' World War Z. The list of the eclectic goes on and on.

All writers take their personal schema with them into their writing world, including everything they've read, watched, or experienced. And, I believe that's part of what drives the creative process. We play upon derivatives and weave them into our own unique story. And we often cross barriers, whether in something as complex as ideology or as simple as my blending of genres.

But as that first critique session taught me, we should be open to the possibilities, to see our words from others' perspectives while maintaining our own vision. Sometimes readers can show you aspects of your story that you never considered. I find that delightful, and it's one of the reasons I keep writing.
-- Heidi Ruby Miller has been putting too much sex in her Science Fiction since 2005 because the relationship is as important as the adventure. She loves high-heeled shoes, action movies, Chanel, intense music, and video games. And she has a column called Geek Girl Underground on IMJ. Heidi also teaches creative writing at Seton Hill University, where she graduated from their renowned Writing Popular Fiction graduate program. The writing guide Many Genres, One Craft, which she co-edited with Michael A. Arnzen, is based on the Seton Hill program and her novel Ambasadora was her thesis there. Her second novel in the Ambasadora-verse is Greenshift.
She is a member of The Authors Guild, Pennwriters, Broad Universe, SFR Brigade, and SFPA.

Greenshift is a novel set in the Ambasadora-verse one month before Ambasadora begins.

DESCRIPTION: David Anlow, a fleet captain forced into early retirement and jaded by an ex-lover, now spends his lonely days shuttling around a group of scientists for hire.

Boston Maribu, Mari to her friends, is one of his passengers, a young botanist who is as beautiful as she is naïve and innocent.

When Mari asks David to teach her about more than just piloting the Bard, nights on their ship heat up and their feelings for each other mature into a relationship neither expects. But a suspicious new client shows up with wicked plans for Mari, and the soldier inside David comes alive, ready to fight for the young woman who stole his heart.

To be in the drawing to win your choice of an e-bundle of AMBASADORA/GREENSHIFT or just GREENSHIFT, please leave a comment letting us know what you're reading now or have read recently and if you'd like the single book or the bundle, please post your email address disguised something like this heidirubymiller AT gmail. The contest ends on Thursday, March 1, 2012. Winner will be notified on Friday, March 2, 2012.

Posted by bloodwebauthor at 7:07 AM